Guests at the ‘Connecting HK and the UK’ aviation exhibition had the chance to virtually try on a variety of uniforms that British Airways pilots and air hostess wore in the 1930s. 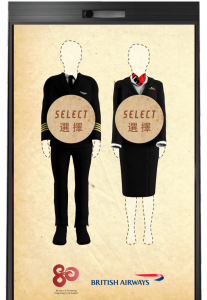 A Chance to Dress Like a Pilot of the Olden Days.

To celebrate the 80 years of air communication between HK and UK, British Airways wanted to immerse the younger generation back into when the first BA flight landed in Hong Kong using the Magic Mirror. Guests tried on a variety of vintage pilot uniforms and took photos in 1930s Hong Kong background.

Richard Tams, British Airways’ executive vice president for China, said, “We are very impressed with the excitingly new elements in the exhibition. Apart from the LEGO model of Kai Tak Airport and entire Kowloon City neighbourhood in the 1990s, we are also bringing the “Magic Mirror” to the people in Hong Kong for the first time. Visitors can take home souvenir photos of them “trying on” different virtual British Airways vintage uniforms with the help of a high-tech mirror, completed with the vintage imagery of aircraft or cabin interiors in the background of the photos….”

You need further information or have a question?